Walking the whole Via Francigena: the path of Joan McGregor 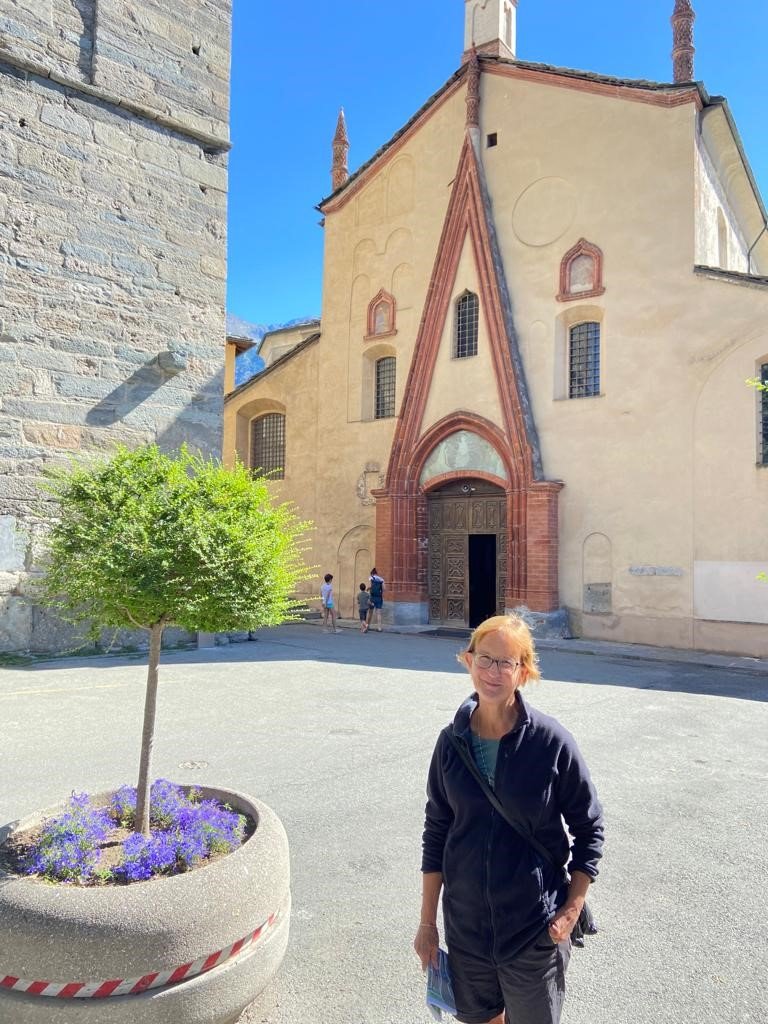 Not many people in recent times have attempted to walk the complete Via Francigena. At 1900km, stretching from Canterbury in southern England to Rome in Italy, it’s an undertaking requiring time, hard work, determination and belief in yourself.

In April, Joan from Australia, travelled to the UK to begin her 5-month journey on foot to Rome. Not only that, she decided to take on one of the biggest pilgrimage challenges…solo!

SloWays were more than happy to sort out all her logistics, accommodation and luggage for her epic trip and everyone in the office has been understandably eager to hear how Joan’s been getting on.

We caught up with her in Switzerland, her third country so far.

Joan, we are completely in admiration of you taking on this challenge. Firstly, what first sparked your ambition to tackle the Via Francigena?

“I’ve always done a lot of travelling all my life and in the last 15 years I’ve done a couple of Caminos through France and Spain. In the past 12 months, it was a time of life when I felt I needed a challenge - it was time to get less comfortable! I found I had the time and here I am….

I chose the Via Francigena because I had done some self-guided Camino successfully and I was confident I had skills now that would let me do a much longer journey.”

What is the appeal about walking Caminos – as this is your fifth one?

My daughter asked to one at the age of 14 when school felt a bit difficult, so we walked the Via de la Plata together, so of course then my son wanted to do one and we did the Camino Norte. Then my other older daughter was determined to get her Camino in before she had children.

Every Camino was different and all amazing. Actually the Camino de Puy was like being Belle in Beauty and the Beast, with castles and belfreys, markets, boulangeries and patisseries everywhere!”


I’m sure that many people will wonder what it’s like spending so much time walking on your own, and in particular, being female myself, how is travelling alone as a woman?

“I have found being on my own a lot more challenging than I expected particularly in the section of France that the Via Francigena walks across because it’s so incredibly remote and rural.

I’ve no fears at all for my personal safety but I have found it intimidating sitting in a restaurant alone, particularly at first. Now I find I don’t care what people who I don’t know think any more! I just do the crossword which is perfect and the meals were something I did look forward to. Perhaps I have become braver!”

Does the trail feel noticeably different as you cross borders?

“Absolutely completely different. I was just 2 days in England walking, and then France was amazing – forests, agricultural landscapes and then mountains. If people are thinking of this trip they need to understand that it’s so wild, sometimes there’s nowhere inhabited to stop during the day – the SloWays team had explained this but to experience it was sometimes quite difficult. Switzerland was more populous with lovely places to stop and brilliantly waymarked paths and of course lakes and mountains too.”


This is your first trip with SloWays so what made you choose us?

“ I have never done anything with a company before but I felt my language skills weren’t up to dealing with French and Italian as I was travelling on my own. I also knew if I had any issues the operator would know and be able to help.

I went to a travel agent in Canberra and they suggested SloWays!

It has been excellent to have the accommodation pre-booked and luggage transfer – even though I’ve got rid of everything and only have 2 changes of clothing, my pack is still too heavy to walk with every day. In the heat, I’m so grateful to have it all transferred, and even though sometimes I could have walked further maybe without the pack, on balance I wouldn’t do without it.”


What would you say to a first-timers?

“Take a very small pack, less than you want and go in with an open mind.”

It’s such a profound undertaking on so many levels, to walk such a long pilgrimage route. Do you feel it is changing you?

“At the beginning on the trail, I listened to podcasts but after that I got used the sounds of the birds and the forest, so it’s a change for me. I have such an active mind that to switch it off and just be in my surroundings is completely different.”

As you leave Switzerland, what has been your favourite part of the Camino so far?

“Bourg Sant Pierre to Col San Bernard. I know the day ended at San Bernard. It was just wonderful. And even better, I also ran into my friend from Ireland who is also walking the Via Francigena. I’d never met before I started  bumping into her along the way. I’d had a fall a day earlier and had had a drop in confidence but had managed to keep going after a lot of encouragement. And then I did make it and it felt wonderful

Also I have to say that every stop between St Berg to Col San Bernard was a gorgeous food experience. In some parts of France it was difficult because it was remote so I really appreciated it when I reached Switzerland even more.”

I’m find the app a little challenging in towns e.g. finding train stations, but I’m contacting SloWays about that in advance so I accept that as one of my limitations. My son is with me aged 25 and he just whips through the technology!

You’ve been on the trail since April, what’s been your favourite moment?

“I’ve met some extraordinary people and the human element of kindness has touched me.

My son has joined me for the past 2 weeks and it’s been wonderful. He’s possibly a bit sick of me now, but it’s been just great. Today was the first day he put his ear pods in!”

Are you looking forward to getting to Rome?

“Yes, I’ve been to Rome about 5 times. Every Australian who finishes school used to go to Europe as a rites of passage. The sense of achievement when I get to Rome will be amazing and I can’t wait!”

We hope to catch up with Joan after her odyssey through Italy and her triumphant entry into Rome in a few weeks. Good luck Joan. Everyone at the office is thinking of you!

Joan is currently trying on the complete Italian section of Via Francigena.

We also offer the entire Italian Via Francigena split into bite-sized week-long walking holidays or a combination of these to make longer immersive Italian pilgrimage trips.

You can also cycle various Via Francigena itineraries starting from 9 days with Siena to Rome to a full 24 days to cycle the complete Italian Via Francigena from Aosta to Rome.

Take a look at all our options here:  Trips on Via Francigena